We Are Not Defined By Our Relationships 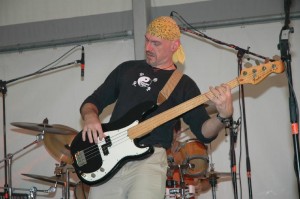 Human beings are social animals. A very wise friend of mine recently wrote to me, “As social beings, we find it all too easy to define ourselves by our ever changing relationships. Get back to playing! You have a voice.” Thank you, David.

In my years of playing in bands, I have tended to strongly identify with the relationship that defines my role in the band. This isn’t a bad thing, of course, in and of itself. It can be, and has proven to be, a problem for me because I have tended to put more emphasis on my role as a band member than I have as me as a musician.

A long, long time ago, I was a horn player in a funk band called Diamond Groove. It was a remarkable band. Upon its demise, I was devastated. I had emotionally invested myself in the band so much that I seemingly forgot that I, first and foremost, was a musician. I ended up putting down my horn and not playing anything for almost 19 years.

Fast forward to 2006 and the demise of my band Life After Failing (you can download music from this band on the Music page on the site here). Once again, I found myself utterly devastated by the turn of events. It’s been four years and I’ve hardly been playing. And that, really, is a tragedy.

David was absolutely right. It’s all too tempting to base our worth and our sense of self on the relationships we’re in at any given moment. For me, it means remembering that I am a musician, standing complete and worthwhile on my own, separate from any band (relationship) in which I am participating at any given time. That means that if I’m not in a band, I should still be making music and actively seeking out others with which to create.

The same stands for any person in any other area in life. You are not defined by your relationship. You’ve done things outside of your marriage or partnership that defined you as an individual. Don’t forget these things just because you’re now married and a husband, wife and/or parent. Paint. Sketch. Play the cello. Hike. Take photographs. Do all those things that you are.

Be your authentic self. You owe it to yourself. And those in your relationships just might get to know you a whole lot better.