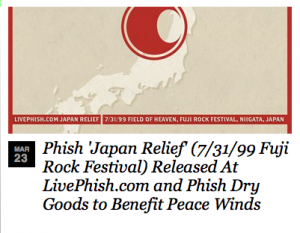 In response to the recent Earthquake and Tsunami that the northeastern part of this country has endured, we’re releasing Japan Relief at LivePhish.com and Phish Dry Goods to benefit Peace Winds America. 100% of the funds they collect for disaster relief will go to support operations through their sister organization, Peace Winds Japan. Relief operations began March 15th and are currently underway in Miyagi Prefecture, where Peace Winds is on the ground providing food, clothing, medicines and temporary shelter to survivors of the Great East Japan Earthquake and Tsunami.

Japan Relief features Phish’s entire show from July 31, 1999 – the middle, Saturday night as well as “What’s The Use?” from their soundcheck on July 29th. The July 31st show crackled with energy, intermingling classic and new material with an exploratory vibe that meshed with the atmosphere of respect and beauty.

Set one had many high points including standout performances of “My Friend, My Friend”, “Back On The Train”, “Limb By Limb” and “Character Zero”. Set two started in the stratosphere with a “2001” > “David Bowie” opener that proved the most experimental music played at Fuji Rock transposed against the gentle beauty of “Wading In The Velvet Sea”. Set two also featured one of the all-time great renditions of “Prince Caspian”.

The encore provided a chance for friend and fellow musician Nawang Khechog to address the crowd about Tibetan human rights and perform with Fish on vacuum for a meditative jam with Fish and with the whole band on flute for “Brian And Robert”. Japan proved a perfect host for Phish, the Field Of Heaven has survived ever since as part of Fuji Rock Festival and Phish has maintained a strong connection with Japan, weaving Japanese lyrics into “The Meatstick” as recently as New Year’s Eve 2010-2011. Japan Relief was recorded by Paul Languedoc and mastered by Fred Kevorkian.

In the past, charitable downloads at LivePhish.com have raised over $100,000 for four non-profits: the Harbor House of New Jersey (The Headphones Jam), the New Orleans Musician’s Clinic, the Tipitina’s Foundation (Katrina Relief) and the American Red Cross (Haiti Relief). Additionally, the Mockingbird Foundation receives funding on an on-going basis from the proceeds at LivePhish.com.

For a complete tracklisting or to pre-order the MP3/FLAC (this show will be released on April 15th at LivePhish.com, and hard CDs will be released May 10th), please click here. Please spread the word about this release and its beneficiaries, who are busy right now providing much needed relief and support in Japan.

From the original press release @ http://phish.com/#/news/2011/23/phish-japan-relief-73199-fuji-rock-festival-released-at-livephishcom-and-phish-dry-good. Please consider purchasing this concert to help support victims of combined earthquake, tsunami and nuclear emergency that is still unfolding here in Japan. I’ve pre-ordered the show in MP3 format. Of course, I’m a huge fan of jam bands in general, and Phish in particular. 🙂