Tokyo Water Getting Back To Normal 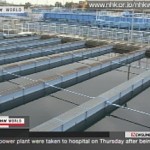 This morning, we see headlines indicating that the water supply is getting back to normal. A sample taken at the Kanamachi plant contained 79 becquerels of iodine 131/litre. This puts it below the maximum safe limit allowed for infants. As such, the Tokyo government has lifted its water advisory, but will still be giving out bottled water for infants.

This is all good. Those of us here getting exposure should relax. The risks really are minimal. The more healthy a lifestyle you lead, the less of an issue the risks, too. So, to amuse myself with a play on words: Don’t worry. Be Healthy. I rock. 😉

In other news, a Tokyo-based agricultural research station apparently recorded cesium 133 levels in Japanese mustard spinach (komatsuna) at nearly twice the legal limit. The amount detected was 890 becquerels/kg, with the legal amount being 500 becquerels/kg. Officials insist that you’d have to eat over 300 kg of it to become unwell. I eat a lot of komatsuna, but not that much.

Till next time, don’t glow in the dark unless it’s because you radiate love. 😀

Correction: Updated article to indicate that cesium, not iodine, was found in the Japanese mustard spinach.