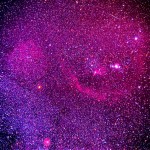 What would it be like without stars at night? What is it we lose? Starry night skies have given us poetry, art, music and the wonder to explore. A bright night sky (aka light pollution) affects energy consumption, health and wildlife too. Spend a few minutes to help scientists by measuring the brightness of your night sky. Join the GLOBE at Night citizen-science campaign (www.globeatnight.org). The third campaign started March 3 and runs through March 12.