Eating for Health and Well-being

Recently, I’ve had a couple of reminders of how people nowadays tend to indulge in food and drink that is not at all beneficial to their health. The first shocker for me came when I was watching a season-7 episode of So You Think You Can Dance, which I must say has probably become my favourite show of all time.

In the show, dancers were “gossipping” about the other dancers, telling viewers in TV land a secret that nobody would know. One of the more brilliant dancers, who actually made it into the top three of the season, was busted for having a nearly uncontrollable soft drink habit. Literally, he was almost never without a can of pop in his hand.

This is a disturbing thought for me. That a highly trained athlete would pollute their body in such a fashion indicates that we’re letting our kids down. We’re training them to do wonderful and incredible things with their bodies, but we’re not giving them the nutrition with which to build and maintain those bodies. Such a non-strategy is doomed to promote injuries that could end a career years prematurely. Moreover, it sets up a person for chronic illness down the road.

In North America, high-fructose corn syrup (HFCS) is touted as being the number one source of calories for the average family. This substance is probably the number one cause of obesity there is. And if you were to study the metabolic pathways such a substance takes, you would avoid soda like the plague that it is.

Worse, however, is that HFCS is prevalent in many, if not most, processed foods sold in grocery stores. And even worse, in North America, more than 90% of HFCS is sourced from genetically-modified crops. One would do well to do a little reading into how researchers found significant health problems in animals fed GMO corn. Birth defects and sterility were but two of the problems. 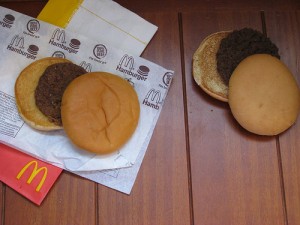 The above photo was used without permission from an article entitled McDonalds Hamburger Turns Fourteen. The photo depicts two hamburgers, the oldest having been purchased in 1996 and simply being stored in a plastic container. No preservatives were used whatsoever. No refrigeration. No chemicals. Nothing.

Why do people put this stuff into their bodies thinking it’s food? My personal definition of food is “a nutritional, organic substance that rots over time”. Honey is about the only food that I’ll allow to fall outside that definition. Burgers of this ilk simply do not fit. It’s not food.

We should not eat this crap.

Over the years, I’ve determined that what we eat is just as important as what we think with regards to what we become. The food we take in is remarkably important, as it is the primary source of all our nutrients and vitamins. In an ideal world, we shouldn’t even need supplements. We should get all we need from the food we eat.

I believe strongly in a diet that is mostly raw and, as much as possible, organic. For me, foods that must be cooked to be eaten, e.g., rice, should largely be avoided. I’m a firm believer in there being four food groups that the FDA would probably disapprove of:

That sums it up for me. Do I stray from that? Sure. I indulge in some dark chocolate from time to time or enjoy some Ben and Jerry’s with a friend. Largely, however, unless the food falls in the above four categories, I avoid it.

I’m 48 years old and I weigh 155 lbs (70 kg). That’s the same weight I was when I was 18 years old. And, honestly, I don’t do anything special to keep the weight down. I eat heartily and exercise moderately. The secret is that what goes in is good for me. The food I eat contributes to my health and well-being. It helps me to combat depression in the face of adversity. It keeps me hormonally balanced. It keeps me happy.

I encourage everybody to take a long, hard look at the food they eat. If you’re at the counter saying, “Super-size me”, you may have some dietary adjustments to do before you’ll enjoy health that enables you to realize that you haven’t been sick in 3 years.