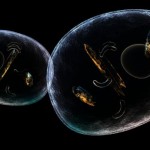 Recent studies on ageing have shown that telomeres play a significant role in cellular senescence. Telomeres are found at the end of chromosomes and are an important component of the process of cellular division. Human germ cells manufacture a complex known as telomerase that maintains telomere length during each cell division. Other human cells, however, have had the gene deactivated that is responsible for enabling telomerase production. Without telomerase, each cell division causes shortening of the telomere until DNA damage is signalled that shuts down cell division. At this point, the cell dies and is not replaced.

One of the techniques I studied in the Advanced Quantum-Touch “Core Transformation II” workshop involves working at the DNA level. In looking at the relationship between telomerase complex and continued cell division, it occurs to me that an approach to anti-ageing here would be to reactivate the gene responsible for producing telomerase.

Another gene that has been deactivated in human beings is responsible for our ability to produce our own Vitamin C. Other primates are able to produce this crucial vitamin natively; humans have lost this capacity and must take in Vitamin C from dietary sources.

The concept of being able to reactivate “turned off” genes is exciting. It would be most interesting to see a study on this. In the meantime, I’ll be looking more closely into the matter from the energy-healing viewpoint. I, for one, wouldn’t mind doubling my life span.