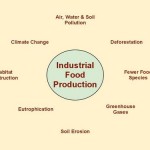 There’s a struggle going on between Big Agriculture and small, family owned farms. It doesn’t get much coverage on the news, but the family farm as we grew up to know it is disappearing. And with it, not only is a way of life being left behind, the biodiversity that we have come to expect in our foods is turning out to be greatly diminished.

Did you know that comparisons of seed availability was done for the years 1903 and 1984? You might be shocked to discover that in 1984, a study of all seeds available from all seed companies in the U.S. and Canada netted only 3% of the varieties that were available only 80 years earlier.

Further complicating the issues is that many of the 200+ seed companies that were in existence in 1984 have been bought out by the large chemical companies, such as Monsanto and BASF. These companies are only too happy to remove seed varieties from the wild and make them only available from their own seed catalogues. Worse, companies such as Monsanto may choose to remove non-adulterated seed from the supply chain entirely, opting instead to only offer genetically modified strains.

Seed and Biodiversity Forum
This is a huge issue because as our seed varieties diminish, so too do the genetic variations that exist in nature. The ramifications of this lack of biodiversity is well known from the standpoint that food monocultures are vulnerable to single-point failures, e.g., drought or pestilence. What isn’t perhaps quite as well known is that our own genetic material is determined by the genetic makeup of the organisms we eat. We like to think that our genetic material is 100% our own, but nothing could be further from the truth. What we ingest has a tendency to be absorbed into our body. Over time,  certain characteristics may express as genes as our makeup absorbs new material.

We have the risk of this happening with GMO foods, and the risk of having pesticides being excreted in our intestines by our very own gut flora is very real. We become what we eat. It’s important that not only what we eat is healthful, but that we get a wide variety of it.

The other element of risk, then, is that biodiversity is coming under threat from large-scale agriculture. Big Agri is a fan of CAFOs (confined animal feeding operations). CAFOs, literally factory farms, are working to encourage government to go after small farmers and prosecute them for growing produce that does not fall under the mainstream. Choice, it seems, is not a good thing.

In an article at Mercola’s site, small farmers of heritage-breed pigs are under threat of being shut down because of false allegations that their pigs are feral and a threat to CAFO pigs. Anybody who understands anything about free-range, grass-feed farming knows that these animals tend to be healthier; just the opposite of the allegations being tossed at the farmers.

With the Michigan Department of Natural Resources currently engaged in a witch hunt for non-white pork, our choice of food once again comes under threat. And, once again, the threat against biodiversity and all the risks associated with it should not be underestimated.

I encourage all readers to watch the embedded video and read the Mercola article. There’s a lot more at stake here than just how many apple varieties you’ll find at the local supermarket.