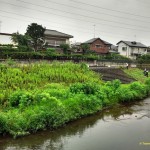 The equivalent of “Parks & Rec” in Tokyo clear away growth along the Tsurumi River. Click for a larger view.

Now that the rainy season has ended in Japan, the parks-and-rec types are out in force to clear away the abundance of overgrowth along rivers and pathways. For some, this represents the equivalent of spring cleaning. For me, however, it points to another symptom of our disconnection from our environment and our need to impart control on the things around us.

As spring progresses, I love witnessing the explosion of growth along the riverside path. Weeds and wildflowers of all imaginable variety abound and bloom. Along with the abundance of greenery comes insects, spiders, bees, wasps, gnats … all the life you’d expect in a thriving ecosystem. Birds are everywhere, singing their songs in beautiful contrast to the background din of cars, trucks and sirens of the city. For me, it is an exciting and beautiful testament to the tenacity of Nature to thrive.

Cut It All Down

It doesn’t take more than a few weeks after the end of the rainy season for the landscape to dramatically shift. Workers comb the various parks and riverside paths to clear away anything that wasn’t planted by humans. And to ensure they only need to visit once this year, everything that doesn’t get yanked is cut back to within an inch of its life. Most of the plants to manage to survive, but some ultimately cannot take the punishment and succumb to being trimmed back so severely. 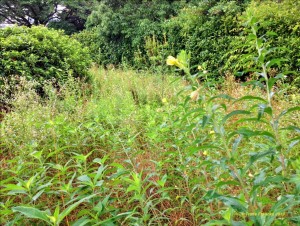 Overgrowth along the Tsurumi River shall not be tolerated. Click for a larger image.

The loss of insect habitats moves the insect populations away from the riverside paths and closer to the dwellings. The birdsong in the following days and weeks is noticeably diminished. It’s a shocking change to be surrounded by lush green on your morning walk to the train station only to face dirt on your way back home. Even after more than 20 years in Japan, I still cannot get used to it. It’s always a shock to my system.

Tokyo is worse for this ‘anti-chaos’ behaviour than many other areas in Japan. Various parks in Kanagawa prefecture are beautifully green. Sure, they get trimmed — and sometimes rather aggressively — but they’re green. In Tokyo, parks generally feature hardpacked sand and cement. The fingerprint of control over chaos is everywhere. Lest anything have a chance to grow of its own accord, Tokyo dresses the environment to discourage unplanned growth as much as possible.

The consequences of these tactics are immediately noticeable for anybody who pays attention. Cutting away a 1.5-metre high canopy to leave dirt and cement exposed to sunlight raises the local temperatures during the day. Cement does a great job of holding the heat, so the environment of these cleared areas becomes significantly warmer. Some paths can expect, in my empirical experience, an increase of 1-2℃.

Urban environments are well documented as being heat attractors. Global warming concerns are being studied by various city planning agencies around the world and many are beginning to draw up plans on how to curb rising temperatures within these greater metropolitan areas. Tokyo, however, is far down the Bell curve in this regard. There is still a strong cultural desire to meld, mould and control the environmental viewing experience.

Until Tokyo learns to relax and let nature grow more freely, it will continue to do more to promote global warming than to prevent it. Canopies of weeds, tall grasses, shrubs (wild or otherwise) and wildflowers all contribute remarkably to reducing temperatures, sequestering CO₂ and controlling soil erosion. They also help manage the water cycle. As Tokyo is entering a near-drought problem with its reservoir levels in 2013, all these ideas are useful for addressing Tokyo’s environmental concerns.