Fukushima Aftermath: Are Things As Bad As ‘They’ Say?

“WOW! You are really unintelligent. When the cancer rates start skyrocketing in a few years (which they have already started to do in the U.S. right after the Fukushima disaster) and the entire Pacific Ocean is radiated (which will be in less than 6 year) maybe you will panic then. You are a typical ignorant sheep and know really nothing about the seriousness of the Fukushima situation. Please educate yourself.”
— The Flamingo Kid, in a comment from Kelp, Radiation and Panic in North America

There’s a lot of bad science out there. And in lieu of bad science, there’s just a lot of misinformation. This article is going to attempt to spell out some of the key points in how Fukushima has turned out to be worse than we’d hoped and yet far less dangerous than many doomsday articles would have you believe. SPOILER: You’re still more likely to die from poor diet and lifestyle choices than by any problem created by Fukushima thus far. Not only is that fact for residents of North America, but it’s also fact for residents of most of Japan, who have experienced much more direct exposure through food and environment.

Much of the fear of radiation from Fukushima is now related to the leaks of contaminated water from the reactors, spent fuel pools and even contaminated groundwater into the ocean. These concerns are valid and caesium levels in the Pacific are increasing somewhat over time, but the concerns have been dramatically blown out of proportion. One of the claims is that a huge plume of caesium-137 has left the Japan coast and is going to ‘fry’ the North American Pacific coastline with radiation from 2014 to 2016. This is patently false. Anybody who knows anything about the ocean currents around Japan knows about the Kuroshio Current (1) and the Kuroshio Extension (2). See the graphic below. 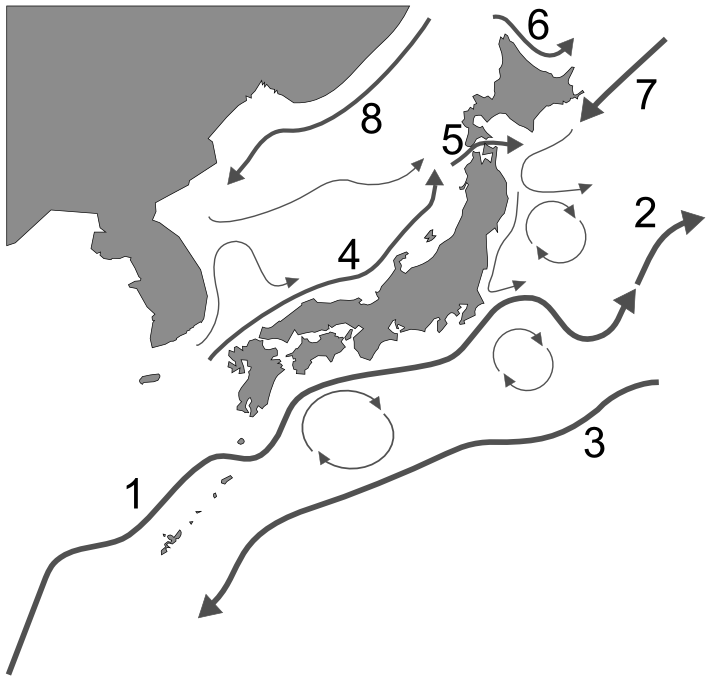 The Oyashio Current (7) interacts with the Kuroshio Extension to create an eddying effect that helps disperse any particles released by Fukushima. Much of this dispersion of heavy particles happens even before the Kuroshio Extension picks up the particles and carry them off into the greater North Pacific Ocean Gyre. Unfortunately, Caesium-137 isn’t all that heavy, so it can be picked up and carried by the currents. That said, it’s only carried to a point. Moreover, it only moves so quickly. Due to the characteristics of the Kuroshio currents and how they interact with the broader gyre currents, it only takes about 4 months for much of the caesium to disperse to well below WHO safe limits.

For what it’s worth, the North Pacific Gyre covers some 20 million square kilometres. That involves a lot of water. A lot of it. During the northern arch across the gyre, there is significant mixing between the warmer waters of the convergence zone with the cooler, faster flowing current along the northern edge. By the time our intrepid caesium particles have reached North America, little of the payload remains. Much of the initial contaminant has mixed with the Pacific waters and dispersed throughout the ocean on the journey eastward. At the end of the day, the overall caesium levels are going up, but by minuscule degrees.

I’ve seen scary numbers about the amount of radiation released by Fukushima. Back in August, shortly after new leaks were reported, it was stated that some 20 trillion Becquerels of radiation had been released. Once you get into numbers that high, it’s difficult for the average person to put it into any meaningful context. So, let’s do that. A banana has an average of ~15 Becquerels worth of radiation due to its potassium content. So, that would mean that by August 2013, Fukushima would have released approximately 76 million bananas worth of radiation into the environment. That sounds like a lot, and (truthfully) it is, but consider this: Every year, we globally produce ~100 million tonnes of bananas. We happily produce, and eat, far more bananas per year than Fukushima has released in equivalent radiation since 2011.

So, yeah. It’s bad, but it’s not Armageddon.

The situation at Fukushima is not good. TEPCO is embarking on an unprecedented journey to try and get this disaster under control and it’s facing a very steep challenge due to the unprecedented nature of the task being undertaken. Nobody has ever had to remove thousands of spent fuel rods from a damaged coolant pool before. Nobody has had to deal with a spent fuel pool that could crumble at the next violent temblor. The clock is ticking and the longer things remain unresolved, the greater the likelihood that another stage of disaster will happen.

In the meantime, my radiation detector, a Radex RD1503, still returns totally safe values despite my relatively close proximity to Fukushima. (I’m in Tokyo, for those who don’t know.) On any given day, I see between 0.12~0.16 µSv/hr. This is just not a dangerous level. I keep checking, hoping that I don’t see levels indicative that TEPCO has hopelessly messed up its cleanup operations.