Fighting To Keep You In The Dark 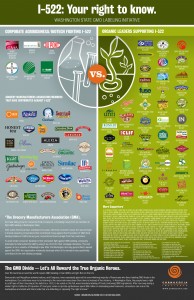 I’m making this article’s graphic a little bit larger than usual because of how important I consider it to be.  I think it’s important not so much because of who was supporting Washington Initiative 522 (2012), but rather who wasn’t supporting it. If you want a real eye-opener with regard to who is financially supporting the effort to block GMO labelling on foods, the GMA members listing (lower left) is worth a good look. Click the graphic. I think you’ll be surprised. I was.

Actually, no. I wasn’t so much surprised as I was mortified. Cascadian Farm Organic? LäraBar? Dagoba? I’ve eaten a lot of their products. It’s worth noting their parent companies (written in white), which gives you the bigger picture. As is so often the case these days, you have to follow the money to know a company’s real agenda. How organic is organic? Apparently, the word organic is only as meaningful as its parent company wants it to be.

I can’t think of a single valid reason for justifying the non-labelling of products containing GMOs. Consumers rightfully expect full disclosure of nutritional information. Why, then, would we allow our food producers to hide the fact that our foods may contain GMOs? If we don’t know, how can we make informed decisions? (We can’t.)

If we look back to California Proposition 37 (2012), which was pretty much the California equivalent of Washington’s I-522, the money involved with defeating the proposition was amazing. In defeating Prop 37, Monsanto spent $8,112,867. That’s a lot of money invested in keeping the public ignorant.

In their effort to defeat I-522, the Grocery Manufacturers’ Association spent an incredible $11 million in total to ensure food labelling continues to deceive consumers. The total contributions to defeat I-522 amounted to a whopping $46 million.

So far, initiatives for honest labelling have been defeated twice. It’s important to understand the mechanisms at work here. This isn’t about government doing its part to ensure that you have all the information you need to make informed decisions. This is about big business doing everything in its power to ensure that you remain blissfully ignorant of what said business is producing so that you continue buying its products no matter what.

If you’re not a fan of GMOs, deceptive labelling ensures that you have very little opportunity of determining whether or not a particular product contains GMOs. Intentionally withholding information is the ethical equivalent of lying. When our governments acquiesce to business interests in a scheme to keep consumers in the dark, we have a serious problem.

Nobody has the right to keep people ignorant. Demand the truth. Demand the Right to Know.