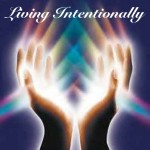 One of the things you learn pretty quickly when looking at the realm of alternative healing modalities is that there is a huge selection available. Whether you’re looking for a practitioner with whom to work or wanting to study a modality, the range of techniques and supposed benefits is mind-boggling. The choices are so vast and the differences in techniques so great that it can be really tough to figure out what would work best for you.

The good news is that the world of energy healing is mostly about intention and has very little to do with technique. It’s unlikely you’ll find many — if any — creators of a modality who would say such a thing, but I have come to strongly believe that it is the intention of the practitioner that counts for almost all of the efficacy of a particular modality. This could be a bit of a controversial viewpoint, but bear with me as I explain my reasoning.

I’ve been involved with energy healing for close to thirty years now. I learned from my chiropractor in Canada. He just called it ‘energy’. No glitter, no fanfare. Just ‘energy’ and a means of visualizing how to work with the energy to clear blockages in the meridians. The concepts described to me by him were closely related to his practice of acupuncture and the concepts made complete sense to me. I eventually learned enough for him to send me off on my own to heal myself and anybody else who was interested.

The most important point I learned from him was the concept of flow. His techniques were incredibly simple. Mechanically, one could learn what to do in just a few minutes. The hard part was developing the sensitivity to energy to feel the flow and, more importantly, the lack of it. In the areas where there was a distinct lack of flow, I learned to push the energy through the area and free up the flow. It was surprisingly effective and I ended up working on a whole plethora of people. In fact, doing healing sessions became my favourite ‘party trick’. Zeroing in on areas that were causing discomfort and then helping a person to feel better was great fun.

Over time, I learned enough about energy healing to recognize that the type of energy work I was doing could be categorized as QiGong. This realization came with it the concept that I’d been using my own personal energy stores. This led me to look into cultivating greater personal energy stores to ensure my optimal health and to effect better results with my clients.

In 2006, I heard about a modality called Quantum-Touch. Contrary to QiGong’s approach to working with personal energy stores, QT taught one to act as a conduit for life-force energy. I thought that sounded much better, so I read the book, took the Basic Workshops (now called Level 1) and around a year later became a certified instructor.

The year 2007 saw me also studying Quantum-Touch’s advanced workshops of the day: Supercharging, Core Transformation I and Core Transformation II. I liked Supercharging for some of the interesting enhancements to the basic QT work, but Core Transformation truly resonated with me thanks to its Zen-like approach to healing. Instead of mechanically working on things, the emphasis was more on creating a space in which there was a profound opportunity for healing to take place. Where the QT Basic (L1) work was more about doing, the CT work was more about Being or Allowing. Nice.

I had a serious A-ha moment with regard to healing in general in the years since becoming a Quantum-Touch instructor. You see, one of the most important elements of any of the Quantum-Touch workshops that is taught is to set your expectations, do the techniques and then let go of the outcome and let it unfold.

“Letting go of the outcome” just happens to be one of the key points in Law of Attraction teachings. If you watch The Secret or What The Bleep Do We Know!?, you quickly see that this whole idea of not clinging to the outcome of events is crucial to having things turn out as you want. It is repeated over and over during Quantum-Touch workshops. Set the expectation of your desired outcome, do the work and then ‘get out of the way’. And — you know what? — it really works. 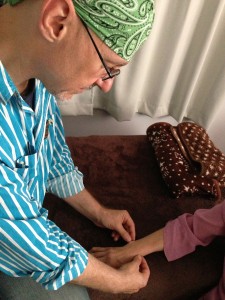 If you look at this photo of a dashing fellow (me) working on a student during a workshop, you’ll note my hands are in a particular position on either side of the wrist. That position is taught as a means of making the energy more easily penetrate the joint. Does it work? Absolutely. Does it work because of the hand position itself? Sure, but not because of the mechanics of the position. Ultimately, what makes it work is the belief that it will work. The hand positions and explanation for when and why to use them are a means of bypassing the conscious mind’s Critical Factor.

During my study of hypnotherapy, I learned a lot about the conscious mind, its so-called Critical Factor and the role of bypassing the CF in the suspension of disbelief. Suspension of disbelief is a key phrase here, because it is the power behind the placebo effect. In almost any situation, when you have a strong placebo effect, you will see an associated efficacy of modality. Because of this tie between intention/belief and placebo effect, skeptics will be quick to point out that it’s not real healing that’s happening. I quite disagree.

The first thing of note is that all healing is self healing. Of course, there are many modalities, techniques or drugs that may assist in facilitating that healing, but the healing is always done by you. This isn’t a new concept; the Quantum-Touch books and workshops take great pains to ensure that people know who the healer actually is. The healer is the person who’s getting healthier. What I learned throughout working with many clients was that client expectations always trumped or enhanced my own.

Quantum physicist Fred Wolf considers the Higgs Field (sometimes called the Zero-Point Field in New Age spheres) to be the realm of consciousness and that consciousness itself is the ultimate creative force of the universe. The Higgs Field is potentially an important field in how we literally construct our universe, for it is here that intention meets with the quantum world to create the matter we see around us.

What does this have to do with healing? If we assume that the Higgs Field exists and that the physics is correct, the combined healing intention of practitioner and client will have profound effects on whatever it is upon which they’re focusing their intention. One hundred percent suspension of disbelief will create immediate and significant ripples in the Higgs Field and literally reorient the structure on which we work.

The significance goes beyond mere efficacy, however; what it really does is toss the importance of a particular modality on its ear. Instead of looking for a modality that is supposedly the best at something, hook up with something that you can really, really believe in with all your heart. Find a practitioner with whom you really connect. That heart/soul connection will result in a wonderful alignment of intentions. That synergy can effect great change.

These days, I find myself flitting between different Quantum-Touch styles, QiGong or even just meditating on the pure intention of our desired outcome. Which approach I go with depends on what feels best to the client. It’s up to the client to heal. It’s up to me facilitate that complete belief in their ability to heal.

If you have health issues that you’re working to heal or if you’d like to learn some valuable healing approaches that you can use for yourself and others, send me an e-mail or even just comment (leaving a valid e-mail, which will remain private). I’m here to help.

Much love to all. Heal well. And have fun on your journey!