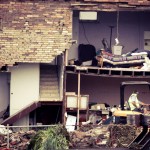 Recent days have seen dramatic devastation by flooding Queensland in recent days. At least 20 people have died and over a hundred are missing. Some 3/4 of Queensland has been declared a disaster area. In Brisbane, flood waters reached the highest seen there since 1974.

The flooding is the result of two normally unconnected weather phenomena: The La Niña interaction between the Pacific Ocean and Earth’s atmosphere, and the annual, low-pressure monsoonal trough that brings seasonal moisture to the region.

La Niña has had a stronger effect this cycle because the Eastern and Central Pacific Ocean is experiencing temperatures up to 2℃ (3.56℉) colder than normal. This is causing a stronger blowing of the trade winds in the Southern Hemisphere due to the higher temperature difference in the waters of the South Pacific.

The dramatic temperature difference has effectively caused the trade winds to ram into the monsoonal trough to create a complex, hybrid supersystem. For the moment, it’s unclear how long La Niña will continue to interact with the monsoonal trough. In the meantime, the northeastern part of the continent bears the brunt of its effects.

We’re seeing unprecedented changes in our climate. Along with the horrific flooding in Queensland, polar bears in Canada were landlocked on the shore of Hudson Bay and unable to hunt for seals due to the lack of ice on the bay. Each year, the ice forms later and later, disrupting the ability of these magnificent animals to hunt for their food.

These are but two examples of the significant climate change this planet is experiencing due to a combination of natural cycles and our population expansion.

In recognition of the terrible suffering happening in Queensland, Living Intentionally will have a global distant healing session for all affected. This session will be held on Saturday, January 15 from 10:00-11:00 a.m. Japan Standard Time (UT +0900). In addition to offering healing to all those affected by the horrific flooding across the state of Queensland, Living Intentionally will also be offering healing energy to Gaia in an effort to balance her energy systems.

Let us all take a moment to offer complete well-being to all those affected.