Brazil – The Other Flood – Loss and Love 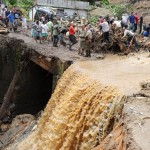 Since the beginning of January, Brazil has seen nearly constant rain. The result of so much rain in a mountainous country has been flash flooding, mudslides and landslides. To date, ~400 have perished.

Authorities are now worrying that thousands more people who live on mountains or along rivers are in peril as the flooding continues to worsen. What could be responsible for such devastating rains in the area?

La Niña is the counterpart to El Niño as a part of the El Niño-Southern Oscillation (ENSO) climate pattern. During the La Niña cycle, temperatures of the Eastern Central Pacific at the equator will be lower by as much as 3-5℃. As I wrote yesterday, this La Niña is stronger than any seen since 1974 due to a wider temperature difference than usual.

Studies of ENSO historical data have been telling, even after subtracting positive decadal variation. In the last 50 years, the amplitude of ENSO variability (that is, the warm-cool temperature swing between an El Niño and La Niña cycle) has increased by as much as 60%. That means that the recent variations are almost definitely linked to global warming.

Along with Brazil and Queensland, the Philippines, Sri Lanka and South Africa have all seen heavy flooding this month as a result of this severe La Niña. It hits very close to home for me. I have both friends and clients in Brisbane, Manila, Botswana, and Sao Paulo. Stories of loss touch deeply.

Many acts of heroism become apparent during such times of tragedy. Common people do uncommon things. Acts of selflessness and giving abound. This morning, I’d like to tip my hat to a young, Australian teenager who lost his life after ensuring that his younger brother would be rescued.

In Toowoomba, Queensland, Donna Rice was in the car with her sons Jordan, 13, and Blake, 10 when they became stuck in the flood waters. When rescuers came, Jordan pleaded to have his younger brother rescued first. Blake was saved. A wall of water came, swiftly taking Jordan and his mother away.

According to his father, Jordan was terrified of water and unable to swim. His sacrifice touches me deeply. Love and Light to you in your gift of life and in your passing, Jordan.

The global healing session on Saturday has been widened to include Brazil, the Philippines, Sri Lanka and South Africa in addition to Queensland. All who have been affected will be included.

Love and Light to all.