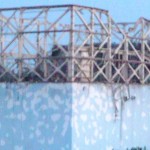 In a dramatic turn of events, the #4 reactor at the Fukushima Dai-ichi nuclear plant has caught fire. Although the reactor was offline when the earthquake and tsunami hit the area, the core was still hot enough for a reaction to ensue.

Initially, it was thought that there was just a crack on the roof of the outside containment chamber, but subsequent examination has revealed that a full-on fire has started. Due to the 7-metre-high tsunami that hit the reactor site, backup generators were knocked offline, making backup power for water circulation/cooling difficult.

The site was originally designed to withstand a tsunami of up to 6.5 metres. Going over that by only 0.5 metres might seem inconsequential, but it’s important to recognize the real amount of water this would involve.

At the moment, they’re looking at hourly radiation emissions of some 400 millisieverts, which is significant and an absolute danger to human health. Officials have implored anybody within a 20-km radius to evacuate immediately, regardless of difficulty or reasons for staying. People within a 30-km radius are warned to remain indoors no matter what.

Those who are outside in the 30-km radius are urged to take immediate shelter indoors. When entering a building, remove outerwear, such as jackets and boots, and brush your hair thoroughly. If possible, wash thoroughly with soap and water, scrubbing briskly.

Within the 30-km radius, anybody who has washed clothes are cautioned to hang their clothes to dry INSIDE the house. Do NOT hang clothing outside, as it will become contaminated with radioactive materials. If you have clothes outside, do NOT bring them inside. They will no longer be safe to wear.

Wind in the area of the reactors has been blowing in a southerly direction since early morning and is expected to do so until early afternoon today. It is my humble (and kind of freaked out) opinion that all are well advised to stay indoors as much as possible if you are in the path of particulate emissions from the reactors.

This is a grave situation we’re facing here. Reactors 1-4 are all compromised. Reactor #2 has 2.7 metres of its fuel rods exposed to air. There are leaks in one or more of the containment chambers. And all the while, aftershocks continue to weaken the structures and create larger fissures from which radiation can escape to the environment.

Godspeed to all. Take necessary precautions to care for yourselves and those you love. Take care of your neighbours. And, if you can, get the hell outta Dodge.