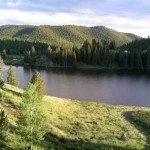 Global warming and its co-dependent, global dimming, have been on my mind a lot lately. The health of Mother Earth has been steadily on the decline for the last few hundred years, and while many of us seem to be aware of that fact, it seems nearly impossible to come to agreement on what to do, if anything at all, about it.

Disclaimer time: I’m a tree-hugging greenie at heart and have been since the day I was born into a family of flower children in 1961. I spent many years in scouting, learning about stewardship, conservation, no-trace camping and orienteering. Much of my childhood and young adulthood featured summers — and sometimes winters — where I’d tear off into the great wilderness of wherever and set up camp for up to a week at a time.

Canoe trips, portages, island camping, river exploration, week-long sailing ventures through the Muskoka Lakes … all these played a huge role in my experience as a young person. I spent a lot of time in various national and provincial parks during my youth in the U.S. and Canada. And during all those adventures, the recurring theme was to steward the land that sustains us.

When it comes to the issue of conservation, stewardship, climate change, global warming and global dimming, I find myself frustrated. Economics seems to be an ever-present adversary in the “hell bent for leather” camp, and many the time I’ve suggested we not lay waste to great tracts of forest, I’ve been accused of wishing financial ruin on various families. It’s sad. Untrue, yes, but sad more because if we fail to care enough for Mother Earth, her ability to sustain us will cease. If living isn’t sustainable, economics is a moot point.

This isn’t pie in the sky rhetoric wherein I participate in a plot for the Rainbow Warrior to thwart the hunt of a whaling ship (I’ll leave those antics to my father). This is, however, about recognizing that our long-term survival quite literally depends on dedicating ourselves to conserving the environment and reducing, as much as possible, our “footprint” on this planet.

From an economic standpoint, the Green vs Industry arguments have been largely adversarial. The Green movement may, for example, try to stop logging on a mountainside in British Columbia and the argument against their efforts is jobs. As one who has a house full of kids, I truly recognize the need for work, but destroying large tracts of forests in return for money seems like a losing proposition. To put that statement into perspective, I’d like to borrow some words from William McDonough during one of his TED Talks:

Design something that makes oxygen, sequesters carbon, fixes nitrogen, distills water, accrues solar energy as fuel, makes complex sugars and food, creates microclimates, changes colors with the seasons and self-replicates. Well, why don’t we knock that down and write on it?

McDonough was talking about how we utilize trees for writing instead of readily-available and inexpensive polymers. Polymers are available and used already for book manufacturing, so why isn’t it de rigueur? I think it’s a reflection of short-term returns versus the long-term scenario. I think it’s a sign of economic habit and an unwillingness to change.

This unwillingness to change is both interesting and prevalent. In the days immediately following the Tohoku Earthquake of March 11, 2011, people all over Japan stepped up to the plate to dramatically curb their energy consumption. It wasn’t just fashionable or a good idea, it was required to ensure that rolling blackouts would be minimized. In the months that passed, however, the trend to return to normal energy consumption levels was unstoppable. Instead of coming home late from a client visit to find a dark entrance to the apartment building, all the lights are blazing. Just as it was on March 10th last year.

I turn them off. Inevitably, somebody else turns them back on and leaves them on, but for at least a few moments, there is a reminder that conservation is a good idea. I think this is vitally important to our very survival.

It has become rather trendy to drive around in an energy efficient hybrid vehicle. Well, for about 3-to-6 years, anyway, at which time many families trundle off to the dealer to buy yet another energy efficient hybrid. There’s a huge problem with this picture: Buying a new Prius every few years has a larger carbon footprint than driving a gas-guzzling, CO2-belching ’64 Olds 442 by a large margin.

Huh? How can this be?

Carbon footprint isn’t just a matter of what resources are required to operate the vehicle, it also includes manufacturing. I suspect you won’t be too surprised to find that it takes a regular ol’ gasoline-powered automobile to average ~66,000 km before it breaks even on its manufacturing footprint. That’s a fair bit of driving before you break even, but if we assume the average North American drives approx. 24,000 km/15,000 mi, we can see it can be as soon as 3 years after purchase of a smaller econobox to hit that break even point after which it’s all gravy.

For you Prius owners out there, the situation is, alas, dramatically different. The batteries in a typical hybrid use rare-earth metals, and the word rare is there for a reason. Rare-earth metals have complex and carbon-rich processing such that the carbon footprint break-even point for a Prius owner is … wait for it … over 600,000 km. No, that’s not a typo. And now the math speaks for itself: If a Prius owner wants to have at the very minimum a 0 carbon manufacturing footprint, he/she will have to drive that Prius for an average of 25 years.

In the coming weeks, Living Intentionally will look at various issues regarding global warming/dimming and explore ways of living a little more lean such that we can conserve our resources and ensure that the legacy we leave to our grandchildren amounts to more than devastation. Time may be running short, but I think we still have some.