Lightworkers Are The Immune System Of The Universal Body 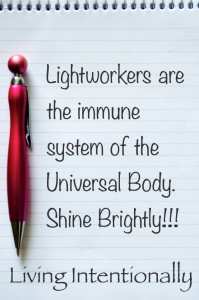 A few weeks ago, I was doing a healing session when all of a sudden the thought rang out in my mind, clear as a bell:

Lightworkers are the immune system of the Universal Body.

It was a profound realization that caused me to break down and cry. Thankfully, it was a distant healing session, so my outburst didn’t surprise anybody but me. In the days following, I’ve given considerable thought to our universe and an individual’s possible role therein.

In any organism, there are systems in place that work to keep the system functioning optimally. There are T-cells, beneficial bacteria, lymphatic system, kidneys and more. We even experience housekeeping during the normal course of the day/night cycle, where nighttime sees our brains opening the interstitial space to flush out toxins and cellular waste products. And while we think of our body as a unit, we’re more akin to a super-organism; we have roughly 2 kilograms of intestinal gut flora walking around with us that are essential for our digestion and immune function.

Instead of focusing on our body as supposed individuals, however, let’s instead look at where we fit into the cosmic scale of things. Our universe has been evolving, to the best of our knowledge, for about 13.8 billion years. From the moment of existence (as science knows it), our universe has featured ever increasing levels of organizational complexity. In the nanoseconds after the Big Bang, there was only hot plasma. Shortly after that, we began to see elementary particles, which later became baryonic matter.

Matter evolved into its own matrix of increasing organizational complexity, eventually moving beyond atoms and molecules to complex compounds that kicked off stars and galaxies. As we know, galaxies spawned huge numbers of stars with even larger numbers of planets. As we move along the time axis of our space-time experience, we consistently see the universe bootstrapping itself to higher levels of complexity in its organization.

Life on Earth has beautifully matched this cosmic evolution. We started off with just our basic organic compounds, shuffled along to create amino acids, proteins, enzymes and then off like a jackrabbit we went. In just a blink of an eye, we moved from disorganized amino acids in a harsh environment to a planet overflowing with life of every possible size, shape and description.

The similarity of life evolving on Earth to the evolution of our universe itself leaves me convinced that just as our bodies have an immune system, the universe itself has much the same system. Consider that the essential fabric of our universe is intention. Consider, too, that our awareness has cultural ebbs and flows, highs and lows. I really do think that Lightworkers are playing an invaluable role in the Universal Body. As we effect healing in ourselves and others, promoting the essence of peace and joy to those around us, we promote well-being of the universe and health within the Universal Body.

The end game? Just as we see species evolving to become something greater, perchance the universe itself is getting ready to evolve into a higher expression of Being. Maybe — just maybe — the Big Bang isn’t the beginning of everything at all. Maybe the Big Bang represents the bootstrapping of our universe into a higher state of consciousness. I like that idea.

Keep shining your Light. When you feel yourself stumbling in the face of negativity, find your quiet place, ground yourself and then carry forth with 100% love, understanding and unconditional acceptance. Only in joy can we promote joy.

Love to you all,