A Wall of Sound 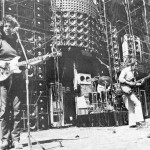 Recently, my friend Steve was showing off a rather useful and annoying app for his iPhone that was intended to get dogs to stop barking by imitating a dog whistle. This app was useful because it showed me that my hearing in my left ear doesn’t have the same range as my right. Human hearing is typically thought of going from 20 to 20,000 Hz. In my case, the hearing in my left ear falls off just under 17,000 Hz.

I can’t really complain about the hearing loss. I’m 49 and it wasn’t until ~10 years ago that I started using hearing protection when playing in bands. I spent a lot of years abusing my hearing. It catches up to you. And there’s no question that hearing damage is a cumulative process.

The photo above is of the Grateful Dead’s infamous “Wall of Sound” P.A. setup. When I look at that photo, I can’t even begin to imagine what it must have been like to stand on that stage, literally at Ground Zero. I’ve heard that some members have claimed it wasn’t really all that bad, but I’m surprised that any of them would be able to hear at all after subjecting themselves to that punishment. Dead shows were LOUD.

Whether you’re a musician, a construction worker or just somebody who enjoys listening to music on an iPod, you owe it to yourself to protect your hearing. If you EVER experience a sense of hearing fatigue, fuzziness of hearing, (temporary or permanent) tinnitus, etc., you’re experiencing hearing loss. Yes, loss. Up to a certain point, the brain can compensate such that we’re not aware of the damage, but one day you’ll cross a threshold of no return.

Don’t let it get to that point. Set your volume level in your iPod such that you can listen to music for hours at a time without any sense of fatigue whatsoever. If you’re in a band, use hearing protection and encourage your bandmates to turn down the volume. Protect yourself.

Don’t let your life become the din of tinnitus or the silence of deafness.