Losing Sight of The Real Dangers 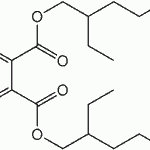 One of the aspects of modern life that I find both fascinating and frustrating is the idea of novel dangers versus old, boring ones. With the tragedy of the March 11, 2011 earthquake and tsunami here in Japan giving us the ol’ 1-2 punch and the subsequent panic about radiation exposure, the issue was really brought home.

Here at Living Intentionally, we try hard to keep it real and put serious issues into serious perspective. In the aftermath of a genuinely serious nuclear accident in Fukushima, the fear of the unknown — ergo, radiation — has really taken a grip on the population. In fact, I keep coming home to find boxes of bottled water piled in various rooms in the house. The reason behind PET bottles everywhere? The tap water might be dangerous.

The tap water here probably is dangerous, but so is water coming out of PET bottles, in my opinion. That line-art sort of graphic at the head of this article is the molecular form of BEHP, a phthalate very commonly found in most plastics that is most often leached into the surrounding environment (including food and water) when the plastic is aged or stressed.

For a thin PET bottle, stress is as little as a crinkly-sounding squeeze. Shipping boxes around the world, lurching and bouncing around on aircraft, fork lifts, trucks and careless handling by store clerks all contribute to stress that accelerates the decomposition and outgassing of the plastic. It’s a serious health risk.

BEHP and BPA both bind to hormone receptors in the body, which causes the uptake of toxins and a lack of uptake of the correct hormones. Hormones are the great communicators of the body, signalling what activities should be done and when they should happen. When hormones get booted out in favour of toxic chemicals, the body doesn’t work properly.

The problem has hit close to home here and it’s apparent that the invisible bogeyman of radiation has captured the attention of family. It’s a novel danger of which few in the family are comfortable in their knowledge. It’s fair to say that’s true for most people. We’ve all been programmed to fear the glow-in-the-dark dangers of radiation exposure, and some movies have done a terrifyingly good job of showing us how nasty it could be.

The more long-term problems end up going almost unnoticed. Most of us younger than 60 years old grew up drinking soft drinks, eating burgers, fries and pizza and learning to hate canned spinach (and with it, all veggies). Since we grew up with such a food culture, it’s “normal” and we figured it’s pretty much always been this way. Of course, we’d be dead wrong, but it’s understandable that we’d assume it’s all good.

With the invention of the light bulb, we changed the entire day/night relationship and turned it on its head. Our hippocampus gets stimulated when it shouldn’t and our serotonin/melatonin cycles get far out of whack. We may become night owls. In the end, we suppress our immune system, create incredible amounts of chronic inflammation and pay the price in increased sickness.

And yet, because “it’s always been this way”, it’s the norm. Most of us don’t have a clue that our “normal” is completely abnormal for being the diurnal creatures we are. And that ignorance of what is good for us or bad for us in our up-close-and-personal daily lives is the real danger.

Yes, the radiation is a concern, but staying up till midnight, undersleeping most nights of the week, eating fast food because you’re rushed and washing it down with a big can of soda will surely kill you long before any amount of cesium you’ll encounter is ever likely to do.

Now’s the time to take stock of how well you’re living. If your intention is to live a long and healthful life, now’s the time to put things into perspective. A lot of the stuff we assume is fine really isn’t. And a lot of the things that scare us the most are unlikely to cause us real problems.