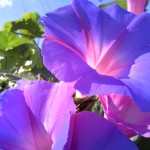 There are few truths more unassailable than this: Mother Earth sustains us. Without her “health and well-being”, humankind has little chance of surviving. Many of us conceptually know this, but we don’t act in a fashion that helps to sustain that well-being.

I’ve spent a fair bit of time mulling this over. I think part of the problem is that many of us have this idea that outside of our respective backyard lay a world that is vast and sparsely inhabited, with vast tracts of unspoiled, pristine wilderness. If you live in various parts of the U.S., Canada or Australia, you could be forgiven for believing that, for outside your front door lay a huge land with large areas of open space and precious few people.

The rest of the world, however, isn’t so lucky. Europe and certain parts of Asia experience incredible population densities. To support those populations, resources are consumed. We may not see the impact of this resource usage. Out of sight, out of mind. Still, it’s worth trying to remember that no effect comes without a cause. The food on your table comes mostly courtesy of huge, industrial farms that limit a region’s biodiversity. The monocultures of modern agriculture require increased pesticide and herbicide usage. All conspire to diminish the planet that sustains us.

As a beautiful reminder, here’s a short, 5-minute look at the Earth, her beauty and her sufferings.