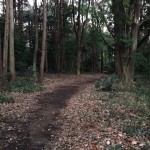 This is an intention-driven universe. While chaos as an event motivator is a convenient crutch, it leaves every participant utterly powerless and a victim of circumstance. That might be a preferred line of thinking for someone who disagrees with the concept of free will. If you consider that we have free will, you must also be aware that our motivations for action stem just as much from us as they do from external sources. Let me explain.

We exist in an interactive universe. Everything in this place we call home, space-time, whatever, is driven by interactions (or relations). These interactions can be chemical, physical and intentional. Chemical and physical reactions seem to exhibit a classical cause-and-effect relationship, but many of these interactions are the expressions of attractions. We see covalence in chemistry as a perfect example of relationships creating stability. We see the attractive force in holding protons and neutrons together. Gravity permeates the fabric of space-time.

Our personal interactions often have predictable outcomes, but they can be stymied by unknown variables — those variables being the things with which we’re interacting. Maybe we expected somebody to be grateful for something we’ve done, only to have it turned on its ear and they’re unhappy, angry or some other unexpected reaction. Maybe we expected a negative response only to be met with compassion and acceptance. Gosh, those are nice, aren’t they? We might venture up to a cute little dog only to be snapped at. Or we might nervously walk past what appears to be a feral cat only to be approached with purrs and rubs.

What is it that drives these reactions? Intention. In the realm of quantum reality, intention plays a non-trivial role in the outcome of events. Intention is just as much a part of the nature of our universe as are chemical fizzes, physical attractions and repulsions. And so it is that the daily unfolding of each of our lives is largely dependent upon our thoughts and our intentions. Our focus of thought and intention is a huge motivator in the cosmic dance.

This idea of intention shaping our experience moves firmly into the realm of how we view (or not) the great flow of life. It’s been my experience that the more we avail ourselves to the flow and the possibility of it bearing great tidings, the greater the possibility of those tidings being brought into our experience. It happens in every possible level of experience, too, from finding a parking space, a seat on a crowded train, a promotion, a better job …. There just isn’t an aspect of existence where intention plays no part. Intention, for lack of a better word, is everything.

The ideas of flow, intention and availing oneself to opportunity are all inextricably linked. Time and time again, the complementary aspects of these concepts are shown to me. Take yesterday, for example: I went out for a walk. It turned out to be a long walk. A very long one, in fact. And it was memorable on a number of levels.

Given that I’ve been setting forth on walks from the same area for more than 20 years, it has become somewhat more difficult to find new routes and to see things I’ve not seen before. Yesterday, however, managed to show (yet again) that if I just avail myself to opportunity and follow my inspiration, all those good things I crave soon manifest.

So it was that I took a new, intentional turn to go where I hadn’t gone before. It took little time before I was in unknown turf. I came across an apiary run by one of the local universities. Cool! Soon, I wound up on familiar terrain again, but the mood of the day was set: If I turn here, what will I discover? 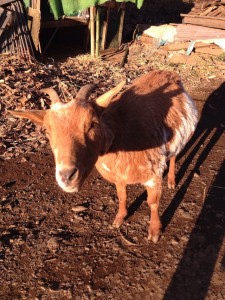 This little guy was one of the highlights in the early stages of what turned out to be a 21.5 km inner voyage. I had turned left off of the dirt road and onto a barely used, leaf-covered path. Down the hill and around several corners I went only to happen upon this friendly fellow who was happy to sniff, greet and otherwise nibble me. I’ve never really been a fan of goats. Till now, that is. It was a lovely little visit.

Many kilometres later, I made yet another of many sudden direction changes only to find myself walking up a hill onto a viewing platform where the pending sunset was maybe an hour away.  The view was lovely: 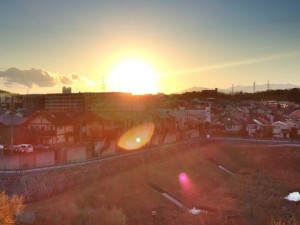 As I watched another episode of Light Show by God and revelled in the warmth of the afternoon sun, somebody stepped forward and suddenly there were cats. Everywhere. Apparently, I was just in time to witness what is possibly a daily ritual between this group of friends: 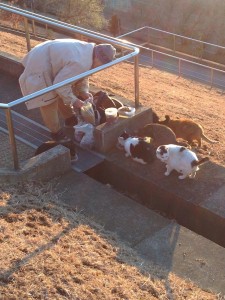 It was lovely to witness. There were no hisses, snarls or spats. Everybody involved seemed to know that there was plenty to go around for everyone. There was no lack. If a bowl wasn’t presently available, one would become so shortly. It was yet another lovely reminder that our acceptance of things as they are opens us up to the riches of possibility to come.

I walked onwards several more kilometres and my legs and feet were starting to feel a little worse for wear. I was driven to continue, though, as I felt there was something waiting ahead for me. True to form for the day, it only took an unexpected turn up an incline to find myself smack in the middle of an arboretum replete with signed paths that I would never have known existed otherwise. It was lovely! 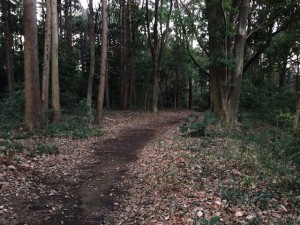 I walked on through a number of paths until the dusk got the better of my eyesight and I decided to exit. As I followed along the side of the woods, however, a road beckoned to my left. I paused for a minute and considered whether I should venture down yet another unknown path when I was already getting seriously tired. I decided to, though, and within five minutes I was presented with yet another pathway off of the beaten path.

I had to go. I just had to. I really didn’t know where it would take me, but I just knew that it would be worth it. And so I walked. It wasn’t a long walk, mind you. The path soon ended and I found myself at a dead end. It was nearly dark and I had no idea where I was. It didn’t matter, though, because to my right was this: 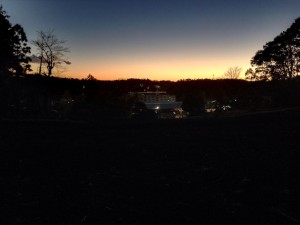 I had walked 16.25 km at this point, tired and in need of a rest. What I received was complete solitude on a hilltop, a comfortable place to sit and an unobstructed view of the best sunset I have seen in many years. The colours in the photo simply do not do it justice. It was the crowning moment on what had been a day full of insight.

Are you consciously attracting your experiences to you or are you still thinking of the chaos of a billiards break? Whatever your beliefs are, they’ll be self-affirming thanks to the Law of Attraction. In the end, there really isn’t any chaos. There is only flow.