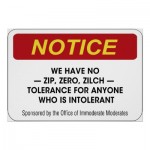 A recent article in the Orlando Sentinel brought to light the scary spectre of zero tolerance in North America. Thousands of children are being arrested for behavioural imprudence and acting out. Instead of arresting youth for purely criminal infractions, educators have pushed forward with an agenda of using incarceration as a means of controlling basic behaviours.

In many cases, these kids are simply being arrested for being and behaving as kids.

I understand wanting to promote ideal behaviour in our youth. I really do. That said, there is a real problem with promoting good behaviour through the threat of arrest. How did North Americans wind up so utterly unmindful of the long-term consequences of such policies? Do they really think it’s a good idea to arrest a 12-year-old for fighting in the playground and, therefore, carry an arrest record for the rest of his/her life?

For a long time now, our collective inability to relate to our children has pushed us toward an agenda of silencing their expression, suppressing their activities and emotionally beating them into submission. Schools, it seem, no longer have the obligation to educate, but rather to create cookie-cutter copies of something that some administrator somewhere decided was socially desirable.

We’ve been on the warpath against our children for a number of years now. It starts with our disassociation from and inability to understand these youth. Instead of recognizing their behaviour as normal, we slap ADD/ADHD labels on ’em and fill ’em full of Ritalin. Instead of seeing a 5-year-old’s fidgeting as simply what bored and/or malnourished 5-year-olds do, we bully and/or drug them into staying still. We adults are only happy, it seems, when our kids are no longer kids.

Little wonder little Billy turns out to be a disaffected youth with a chip on his shoulder the size of a small country.

So, now we not only drug our youth into compliance, we arrest them. In Florida alone, more than 12,000 students were arrested in 2012. To me, that simply boggles the imagination. Moreover, it scares me to think that so many people in North America think this is simply the new normal. North America, it seems, has collectively gone bonkers. Common sense has left the building along with Elvis.

Unfortunately, these issues are merely symptoms of deeper issues in the North American psyche. Each generation seems to be giving away more of its personal freedoms in the name of safety and security. Stiff and unforgiving laws have been put in place that defy any sense of critical thinking to justify and encourage. Instead of nurturing a generation and coming to mutual understanding, North Americans seem determined to impose behaviours by force and persecution.

It is doomed to fail.

Children only grow up to be responsible adults when they’re allowed the time and freedom to grow into the role. Children learn by example, so children need to see role models who espouse understanding, kindness, altruism and responsibility. If all kids see are slap-downs and bullying in the face of unwanted behaviour, they will impart exactly those behaviours upon others.

Remember: We Reap What We Sow

We’re on course to living in a complete police state whereby anyone who doesn’t live according to the tenets imposed by the state shall be incarcerated. And, unlike the communist view of reprogramming recalcitrant citizens, North American prisons do not care a lick about rehabilitation or reprogramming. Three strikes is now the euphemism for growth in the economic sector.

And that, folks, scares the hell out of me.